Finally I got a new laptop and a weekend to play with something interesting !! As I mentioned in one of my previous blog posts I had some discomfort with Ubiquity while trying to work on a complex commands. I also mentioned some ideas how I thought the things could be improved. Unfortunately I have not got any support from Ubiquity side so I decided to try to implement whatever I had in my mind. (If interested check my previous posts). You might noticed link on my home page pointing to the feed with a set of Ubiquity Commands for Bugzilla. Well development process is in it’s alpha period right now, but still I would be happy if you’ll give it a try and of course any feedback is more then welcome. It won’t kill your browser or PC in the worst case scenario you can just unsubscribe from the command feed.

So in this post I want to touch several topics

The idea behind these commands is to make user able to configure several Bugzilla connections. For most of the users I can imagine there will be only one connection for Bugzilla, but there will be some people (For example) who would need to have several of them. I personally use https://bugzilla.mozilla.org and https://bugs.kde.org, so not being able to use Bugzilla commands on any of thous is unacceptable.

Ideally you won’t be able to use Bugzilla command until you’ll set up at least one connection. In order to do so all you need is to type 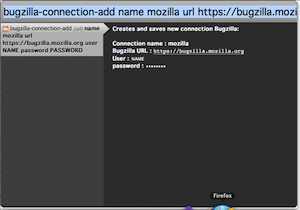 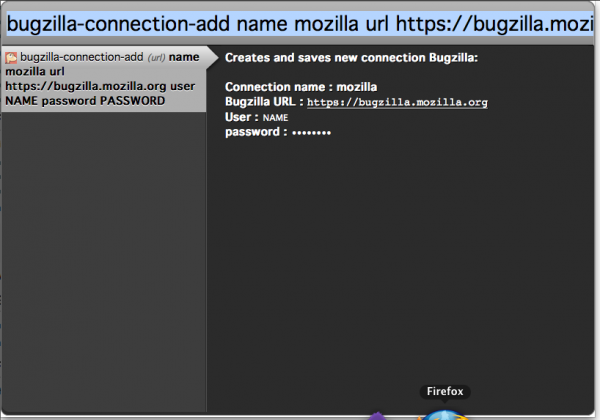 Please change the USER with the real user which should be your email address and PASSWORD with whatever your password is. In the end it should look like picture above. (In case if you don’t have a user / password you can register and get them otherwise you can type some random words) Currently none of the commands use user / pass data.

Name of the connection in the example above – mozilla, is the name you’ll use to tell ubiquity, which bugzilla system are you talking about… (There will be more details below).

This is simple command which will show the version of the Bugzilla system on the server. Nice part here is that Ubiquity knows that we have only one connection so it automatically uses that one. Typing command itself should be enough to see:

This one is the last one, so far, but it’s a sweetest on as well !! Yes it returns the info for the bug by it’s id. This nice pat takes input of, bug numbers separated by white-space character(s) and uses async calls to get the data from Bugzilla xmlrpc service. Well it’s better to look at the picture below: 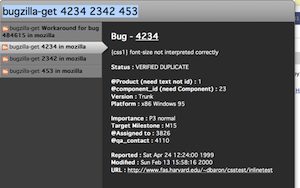 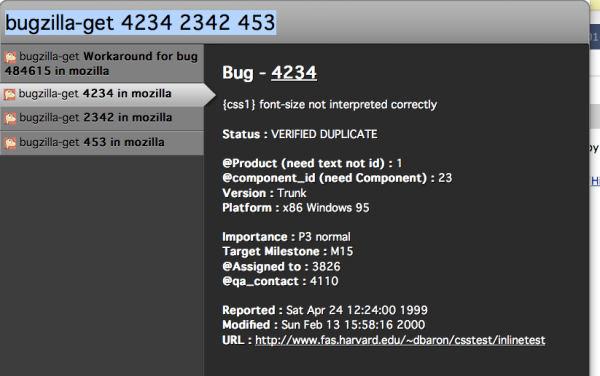 Important points are not that visible yet. As you can see in the screen-shot’s ubiquity always adds string “in mozilla” to the command suggestions. It’ trivial cause we have only one connection and we called it mozilla so what’s a big deal about it ?… Well lets add one more connection by running command:

Now we have when we have two connections one for Mozilla and another for KDE we can look at few more pictures.

Ubiquity will search bug 4234 in the KDE Bugzilla system, still not a big deal I agree, but since you started discussion with ubiquity about KDE it remembers it like if it was a human 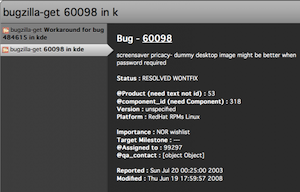 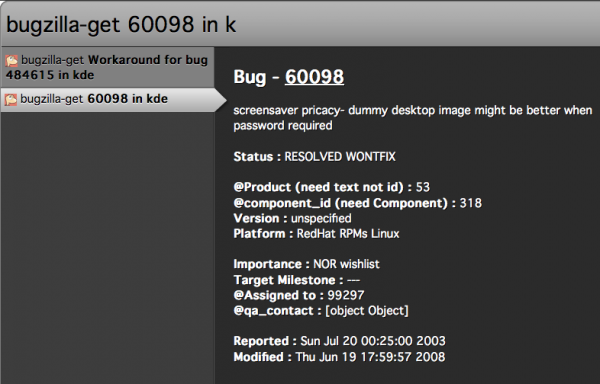 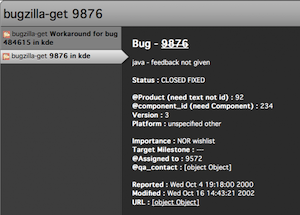 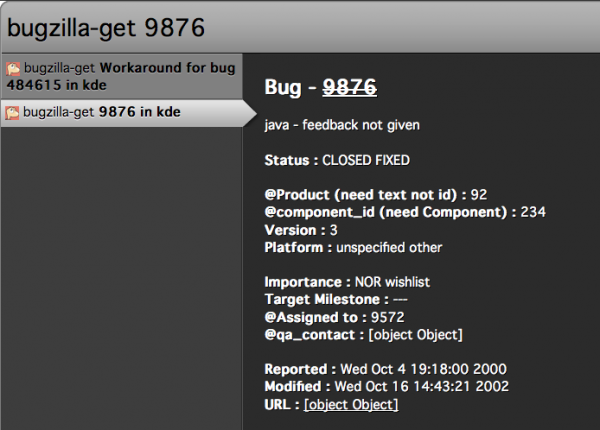 In this screen I just typed the bug number, but as I was talking with ubiquity about bugs in KDE it assumes that I still talk about KDE so I don’t need to retype that part again 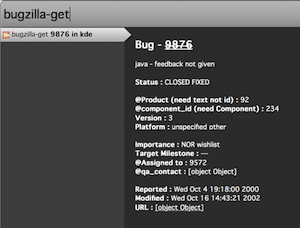 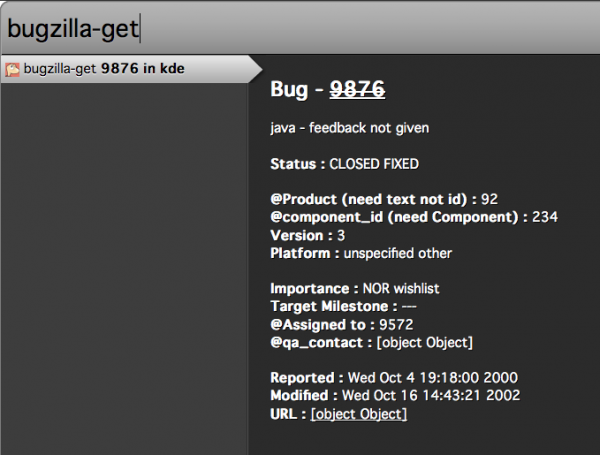 In this case I just typed command without specifying nor connection nor bug id. As I mentioned bug 9876 in the KDE bugzilla ubiquity still assumes that I’m talking about the same things and that’s the way we act while discussing something with humans. We assume that person we are talking with understands, that we are talking about the same topic unless we changed it. So I tried to bring the same approach here ubiquity remembers whatever you said and assumes that next command is related to previous one so you don’t need to repeat all the details. Ubiquity stores this data across the sessions so even week after the last command you can still go on with it. Benefits of this approach will be much more visible when the next command bugzilla-comment will be fired where you’ll be able to specify only comment (connection & bug will be resolved automatically)

View from the inside – Adjectives, way to extend nouns

So below is the code which adds a function CreateAdjective to the CmdUtils that can be used inside the command feed. Function itself extends normal ubiquity nouns to so called “adjectives“. Basically it function takes noun as an argument and adds some useful functions, getters, properties. Lets take a look at each of the features:

I believe a lot can be still improved in this schema (Like storing suggestion in the SQLite instead of prefs), but that’s how it looks now.

Wow I wrote a lot !!! Hope you’re still enjoying reading this post. As always any feedback is more then welcome!!